Coding Across the Curriculum

When I was in the 10th grade my parents insisted I take a computer class in school.  I resisted saying I had no interest but they were relentless.  They were sure computers were going to be essential in my future.  Little did they know!

One of my new hobbies is coding. 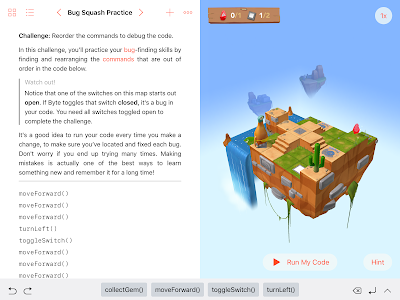 In September, Apple launched a new app called Swift Playground.  My son and I quickly became addicted.  (Pokémon talk went silent for about a week and it was blissful!)  We loved watching the little alien walk around collecting gems and toggling switches.  I watched as my 6 year old patiently thought through the steps needed to solve each puzzle.  I was amazed.  This is a kid whose teachers tell me he needs to slow down and not rush through his work.  I knew instantly that we were on to something.

Two weeks ago I brought home a Dash and Dot robotic kit.  All three of my kids took turns using the iPad to come up with the right path to manoeuvre Dash around a couple of boxes we had set out.  Again, my six year old patiently clipped together code to make the robot perform a set of instructions.  His eyes would light up with excitement once he played his code to see if he had succeeded in the task.  Moreover, when his code failed, he didn't pitch a fit (as I was expecting) but came back and reviewed his coding.

I began to think about how this "playing" was such rich teaching.  It involved problem solving, collaboration, reflection, and critical thought.  For a minute I wished I was a Computer Science teacher. then I realised the power of coding across disciplines.

Since most of my background is in English Language and Literature, I began to think about coding and storytelling.  Imagine the power of having students write a story about Little Dash and Dots journey.  It could work either way.  A student could write a story about the journey or a student could code the robot based on a story.  They could pair up and switch.  Students could reflect on challenges and successes in coding.  Why not dress a robot up like a character and set up a course which mirrors the events of a story or novel.  The list in my head went on and on.  This was only for one robot!  I was pumped.

As I continue to explore this new hobby, I am going to an apple workshop next week and helping some schools plan some Hour of Code activities.  I am pumped.  Stay tuned!