Yesterday I went back (via GHO) and visited Ms Signer's gr. 5 class to see how their #ProjectFlip prototypes were coming along.  Many has started but were not done...and that gave me the opportunity to give some great feedback.  It also meant that there was no time to try out prototypes...but that is OK since they decided to build small models of the prototype and vote on one after the pitches to build as a whole class.

The students each gave me a mini, unstructured pitch and boy they had BIG plans.  Their plans involved a lot of cardboard!  One group hopes to build a box that 5 people can sit in at one time!!  Many spoke of fairy lights (I reminded them to ensure there was enough light to see the speaker), and I loved how many said they were going to post words of encouragement in their area to give people confidence when they record.  I had a lot of questions about how they would get all the tech they were hoping for - one group spoke about a surveillance camera in their box so teachers could see what was going on inside. 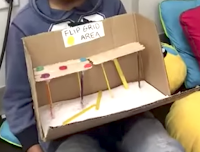 I reminded them that their first ideas might seem viable, but when it comes time to build to remember what we read in The Most Magnificent Thing...sometimes you need to pivot from the original plan.  The big cardboard boxes might be difficult to build, unstable, unsafe, or too big.  I reminded them to have a fully built (but small scaled) prototype for next week and suggested they use dolls/stuffed animals to represent people.  We talked about the power or rehearsal and ensuring that everyone in the group talk at some point.

We also created a template for the pitch - which is to be 3 minutes long (maximum).  It should include: 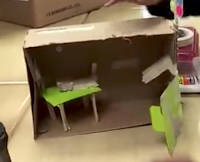 I also told them that next week for their actual pitch, we would have a special guest join us from Flipgrid - User Engagement lead - Adam.  Given them an authentic audience really excited them.